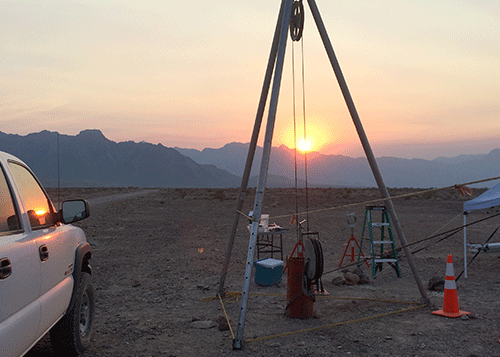 Sulfate-reducing bacteria Candidatus Desulforudis audaxviator (CDA) were originally discovered in deep fracture fluids accessed via South African gold mines and have since been found in geographically widespread deep subsurface locations. In order to constrain models for subsurface microbial evolution, we compared CDA genomes from Africa, North America and Eurasia using single cell genomics. Unexpectedly, 126 partial single amplified genomes from the three continents, a complete genome from of an isolate from Eurasia, and metagenome-assembled genomes from Africa and Eurasia shared >99.2% average nucleotide identity, low frequency of SNP’s, and near-perfectly conserved prophages and CRISPRs. Our analyses reject sample cross- contamination, recent natural dispersal, and unusually strong purifying selection as likely explanations for these unexpected results. We therefore conclude that the analyzed CDA populations underwent only minimal evolution since their physical separation, potentially as far back as the breakup of Pangea between 165 and 55 Ma ago. High-fidelity DNA replication and repair mechanisms are the most plausible explanation for the highly conserved genome of CDA. CDA presents a stark contrast to the current model organisms in microbial evolutionary studies, which often develop adaptive traits over far shorter periods of time.

“Working with the SCGC has been an incredibly rewarding experience for our work.  As a boutique operation, they offer personal expert attention that is not always available from larger organizations.  They not only deliver top quality results, but they make an effort to understand the specific scientific goals of the project, and can set their sails accordingly.”

“Since its inception in 2009, the Single Cell Genomics Center at Bigelow has been a true champion of generating single-cell genomes of highest quality, handling samples from a broad array of ecosystems.  These genomes have enabled ground-breaking scientific insights, many in collaboration with the Joint Genome Institute. I very much look forward to the continued success path of SCGC and the future research enabled through its output!”

“Years ago, I sent some extremely low biomass samples to the SCGC for separation and single cell amplification. When we looked at the resulting SAGs, I thought it was all contaminants, which wasn’t too surprising given the difficulty of my samples. Recently, my student decided to take another look at those SAGs, now that the public databases are richer. She just discovered these SAGs are actually from an extremely interesting and environmentally relevant group! So now we’ve picked the data back up again and are analyzing it now.”